Virtually in the TARDIS

BOUNDARIES are being pushed as the Doctor discovers the new world of virtual reality.

Fans will be able to step inside a VR version of the TARDIS in a new immersive adventure called Doctor Who: The Runaway, according to BBC VR Hub head Zillah Watson.

“Our team at the BBC VR Hub has been creating new experiences with the goal of helping to usher virtual reality into the mainstream, and Doctor Who is exactly the sort of series that can help more people to try this new technology,” Zillah said.

“The show has been pushing boundaries for over 55 years, and VR enables Doctor Who to explore a whole new dimension of storytelling.”

The new original story will see Jodie Whittaker voice an animated version of the Thirteenth Doctor and will also feature brand new music from Doctor Who composer Segun Akinola.

Viewers will join Thirteen on board the TARDIS for the 12-minute animated interactive story – written by Victoria Asare-Archer and created as a co-production between the BBC and Passion Animation studios. It will be available on selected VR headsets in coming months, according to BBC Digital Drama creative director Jo Pearce. 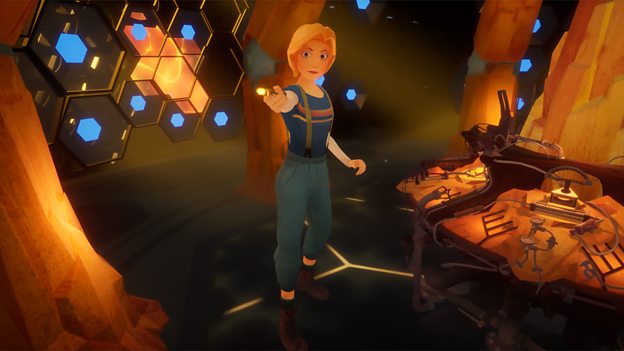 Jodie Whittaker becomes very animated in her next adventure as the Doctor.

Jo said viewers would get a chance to be in the TARDIS with the Doctor and help her on an exciting adventure – finding themselves at the centre of the action facing a deadly threat.

“Fans will experience the TARDIS like never before in this thrilling new interactive story,” she said.

“As ever, the Doctor is full of warmth, wit and charm – helped by a wonderful performance from Jodie – which puts fans at the heart of the story as they immerse themselves in this beautifully animated world.”

The Runaway is directed by Mathias Chelebourg, whose previous VR films include Alice, the Virtual Reality Play and The Real Thing VR. It has been produced by the BBC’s digital drama team, BBC VR Hub and Passion Animation Studios.