Russell T Davies returns as showrunner for the 60th anniversary

On 29 July 2021, the BBC announced that Chris Chibnall would be stepping down from his role as showrunner for Doctor Who and Jodie Whittaker would also be leaving her role as the Thirteenth Doctor. For the remainder of 2021 fans can look forward to a six part event serial. In 2022 this will be followed by three specials, the third and final special being a feature length adventure to farewell Jodie Whittaker, leading into the Doctor’s regeneration. With 2023 being the 60th anniversary of Doctor Who, many fans were speculating as to what the future was likely to hold… that is until the BBC announced that Russell T Davies would once again be taking the helm, both for the show’s 60th Anniversary and onto further series beyond.

Current showrunner Chris Chibnall stated: “It’s monumentally exciting and fitting that Doctor Who’s 60th anniversary will see one of Britain’s screenwriting diamonds return home. Russell built the baton that is about to be handed back to him – Doctor Who, the BBC, the screen industry in Wales, and let’s be honest everyone in the whole world, have so many reasons to be Very Excited indeed about what lies ahead.”

Russell T Davies was of course the showrunner who oversaw the successful return of Doctor Who in 2005. He worked with two Doctors, Christopher Eccleston and David Tennant, during his tenure. During that time he also launched successful spin-off shows The Sarah Jane Adventures and Torchwood. Needless to say, he is certainly a safe pair of hands to oversee the anniversary milestone. More than that, his approach to Doctor Who in the past has always been about pushing it forward, as exemplified by his decision not to start the relaunch in 2005 with a regeneration scene. All of which suggests that he will be looking toward new horizons for the show when he comes back to it in 2023.

“I’m beyond excited to be back on my favourite show,” Davies himself stated. “But we’re time-travelling too fast, there’s a whole series of Jodie Whittaker’s brilliant Doctor for me to enjoy, with my friend and hero Chris Chibnall at the helm – I’m still a viewer for now.” 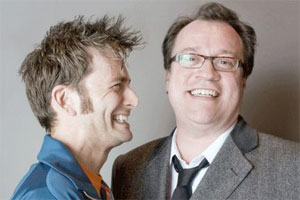