It is with sorrow, that we have to report the passing of Deborah Watling.

Watling first joined Doctor Who in 1967, playing the second Doctor’s companion Victoria Waterfield. She, along with Frazer Hines (Jamie) would battle along with the Doctor, Cybermen, Daleks, Ice Warriors and of course, the Yeti.

It is well known that the team of Troughton, Watling, and Hines got on extremely well with Watling often the butt of the boys jokes. Many of her stories have been wiped since transmission, and the return of two to the archive a few years ago, The Enemy of the World and most of The Web of Fear brought her considerable delight.

She left Doctor Who in April 1968, at the end of Fury from the Deep.

She briefly returned to the character of Victoria in 1993, for the Children In Need skit, Dimensions in Time before recreating Victoria in a number of audio plays for Big Finish.

Deborah Watling was diagnosed with lung cancer six weeks ago. She was 69. 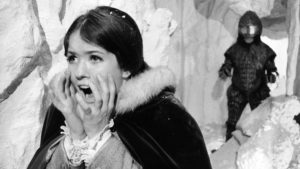