THE excitement is ramping up to eleven (or is that 13?) as the countdown continues to the new series with the synopsis for episodes one and two and a new image released this week. 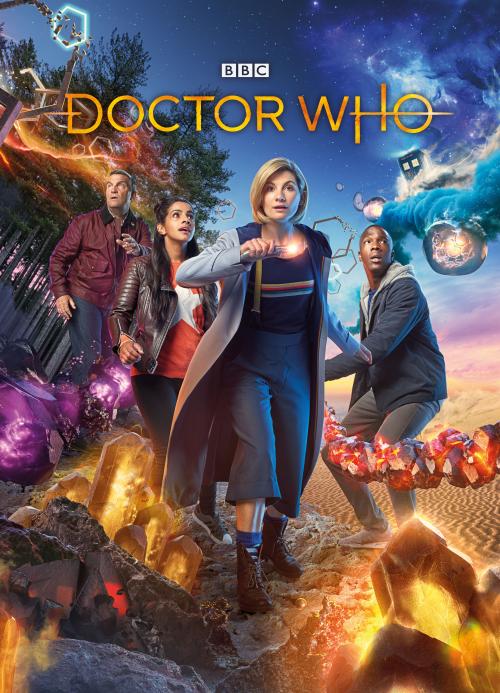 The new image features the whole TARDIS team in suitable action poses while the supporting BBC press release offers up some brief comments from Chibnall, Whittaker and Bradley Walsh (who we’re of course all about to know better as Graham O’Brien).

It also reiterates that the first episode will be called The Woman Who Fell To Earth while the second is The Ghost Monument.

It is now less than a month until the new Doctor hits Australian screens (big and small) on Monday, 8 October.

“Finally – Jodie Whittaker’s Thirteenth Doctor is about to crash land on to the nation’s screens,” Chibnall said via the latest release.

“Alongside Jodie, we have a delightful ensemble of new characters for the audience to fall in love with, led by the incomparable Bradley Walsh.”

The synopsis for Episode One – The Woman Who Fell To Earth is as follows:

We don’t get aliens in Sheffield. In a South Yorkshire city, Ryan Sinclair, Yasmin Khan and Graham O’Brien are about to have their lives changed forever, as a mysterious woman, unable to remember her own name, falls from the night sky. Can they believe a word she says? And can she help solve the strange events taking place across the city?

We have also learned the name of the second episode: The Ghost Monument (which will also star veteran British actor Art Malik). The synopsis follows:

Still reeling from their first encounter, can the Doctor and her new friends stay alive long enough, in a hostile alien environment , to solve the mystery of Desolation? And just who are Angstrom and Epzo?

Chibnall went on to describe what we could all expect from the new series.

“You can expect emotion, you can expect action and adventure and monsters and far ­off planets and huge alien vistas,” he said

“You can expect a lot of humour, a lot of warmth and some great characters.

“Four great new friends for you to meet as they go through past, present and future and meet some incredible people from history and go and battle on alien planets and fight threats closer to home.

It’s really a whole array of different stories. Ten individual stories that show off the range of the Thirteenth Doctor and her friends but also of the show as a whole. I hope you can expect everything you’ve ever loved about Doctor Who.

“More than anything, it’s hopefully incredibly entertaining and I think this series has something for absolutely everyone. If you’ve seen Doctor Who before I hope we’re going to be giving you all the stuff you love. If you’ve never seen it before, this is the place to start and I think you’re in for a rollicking ride.”

Asked to describe the new series in a sentence Bradley Walsh proved less than succinct.

“This new dawn for Doctor Who will be ground­ breaking and exciting and fantastic and unpredictable and beautiful and timeless,” he said.

“I’m telling you now, this is going to be so brilliant. Jodie is fantastic! She works so hard and is so enthusiastic. She leads from the front and she’ll trailblaze for a lot of other shows. The new series of Doctor Who in a sentence is forward thinking, innovative, bold and brave.”

Whittaker herself was asked what the themes of the series would be.

“When I watch TV and film I want to feel engrossed and excited, particularly in this world and genre. Doctor Who in itself is its own genre. I suppose you want it to feel like a roller coaster ride!”