New game goes to the virtual edge of time

The Doctor Who virtual universe is set to expand, with a new cinematic feature-length Doctor Who VR video game due for release in September.

The new “mission”, Doctor Who: The Edge of Time, follows hot on the heels of the recently released The Runaway – a short animated VR experience. 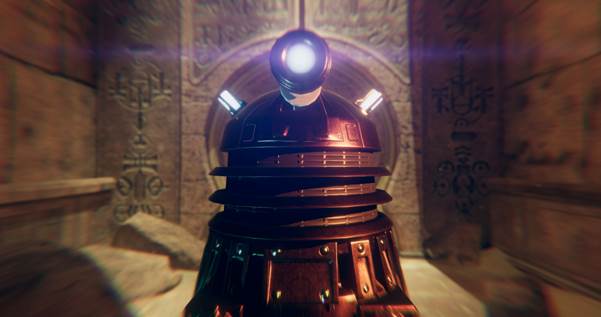 Published by PlayStack and developed by immersive entertainment studio Maze Theory, Doctor Who: The Edge Of Time will allow fans to embark on a brand-new and fully-interactive adventure, inspired by the show’s 55-year history and starring the Doctor’s current incarnation, played by Jodie Whittaker.

“VR is the perfect home for a truly immersive Doctor Who adventure,” he said.

“Fans and newcomers alike will be able to experience the universe of Doctor Who like never before, working with the Doctor and facing enemies new and old.

“Gaming is a key part of the future of Doctor Who and allows us to tell new and exciting stories beyond the TV screen.”

“Doctor Who is an incredibly exciting and timeless franchise with a passionate and committed global fan base,” he said.

“We are looking to give them an entirely new experience; an opportunity to team up with the Doctor and feel like they are in the show. This, of course, includes piloting the TARDIS, a dream come true for fans!”

Armed with a Sonic Screwdriver, players have the chance to solve mind-bending puzzles, grapple with classic monsters and encounter new horizons in a quest to find the Doctor and defeat a powerful force that threatens to destroy the fabric of reality.

This time around some of the show’s iconic “Big Bads” will be making an appearance including the biggest baddies of them all – the Daleks as well as some brand-new monsters.

This time around the Doctor has been hurled through time and space to the end of the universe where a virus is threatening to rip apart reality has been released.

Fans will have a chance to pilot the TARDIS across new and familiar worlds as they set out to recover a series of “powerful time crystals” that can repair space, time and ultimately save the entire universe.

Doctor Who: The Edge Of Time will launch on PlayStation VR, Oculus Rift, HTC Vive and Vive Cosmos in September.