Happy 58th Anniversary everyone! And talking of anniversaries – own very own Dallas Jones has been working hard to figure out just what the exact anniversary date should be for the DWCA publication Data Extract…

The anniversary date of the beginning of Data Extract (DE) (or as it was known at its inception – Australasian Doctor Who Newsletter) is currently lost in the mists of time unless I can borrow a TARDIS. The only three people at its birth were me, Tony Howe and his mother, Rosemary. Unfortunately, Rosemary has passed away and it is down to my and Tony’s memory of those 41 years ago.

There is no documentation of the printing of the first DE as Tony printed it in his garage on a printer that the Sydney University Science Fiction Association (SUSFA) owned, he did have a diary of what he printed but did not start that until a few years later. As I was working for Telecom Australia at the time in a 9-to-5 job I could not do the newsletter during the week, other than gathering news and typing info up on my poor manual ribbon typewriter, which I had bought as a student in high school 10 years before. I needed access to Tony’s Remington golf-ball typewriter to type the issue up as it used a different process that produced clear crisp type. The only other documentation that would have provided dates would have been the receipts that would have been given to Tony for payment of the first posting of DE which went out with issue 17 of Zerinza. Unfortunately, such documentation is either lost or is somewhere buried in either Tony’s or my home.

Last year for the fortieth anniversary of DE it was published that November 24th was the anniversary date. This was based on the information, that appeared in the first issue, advising of Tom and Lalla’s upcoming marriage. So for the fortieth, I checked online and found that this event was reported in the UK newspapers on November 19th. I assumed that DE was posted with Zerinza the following Monday and thus the date of November 24th was arrived at. Since then I have checked with Tony and he is not sure on which day he posted Zerinza (which included the first issue of DE for free as a promotional offer launching the club’s newsletter with a subscription form) after DE was printed, so I assume the posting day as the 24th is incorrect and what day it was posted is currently not specifically known. So the best date to celebrate DE beginning would have been on the date on which it was probably printed Sunday, November 23rd.

Originally many years ago, without doing much checking, I thought that and printed that DE went out in October, I at that time forgot to look at the issue to see that it clearly had November on the front page. The October date had been mixed up in my mind as this was the time when I decided I wanted to help the club and do a newsletter and I spoke to Tony to get his approval to class any newsletter as a CLUB one and if it was OK if he could help me with printing it and promoting it. So DE came into fruition as an idea in October and into reality in November.

In the last few weeks with the 41st anniversary of DE coming up, I decided to see if I could further confirm this date and I spoke to Tony and he did some checking and advised me that he had found that on page 18 of Zerinza 17 it stated: “Since the newsletter was printed more news – another companion Nyssa…”. I looked at my copy to confirm this and I then followed up on the internet and found that the report of Nyssa as a companion was announced in the UK on Saturday, November 22nd. Thus the preparation of DE, ready to be printed, had to have been finished by the latest on Sunday 23rd during the day for me to have seen the completed printed issue on Sunday, otherwise the info about Nyssa would have been included. This means that the information about Nyssa came in after DE had been printed on November 23rd and before the last page of Zerinza was printed, sometime in the next couple of days, and Zerinza was posted, with DE included, later that week. 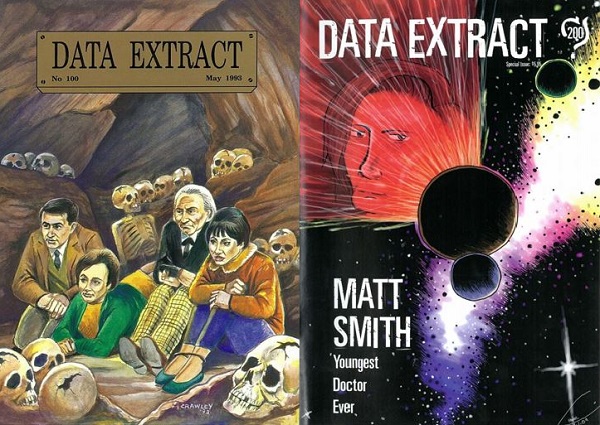