Back in 2014, Dale Watts submitted an article to Data Extract magazine in which he weighed in on the debate surrounding a female Doctor. With Jodie Whittaker’s tenure in the TARDIS growing ever nearer, we thought it would be interesting to revisit Dale’s article. We now reproduce it here for the first time since its debut in DE#226, abridged for the online format. 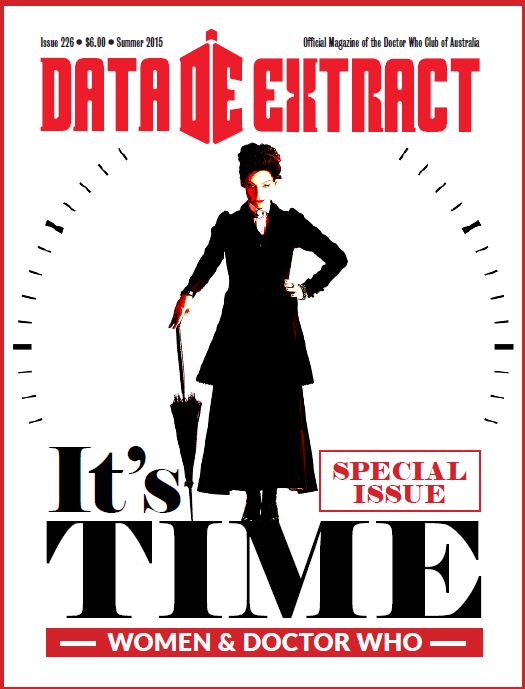 A female Doctor: a great idea or not? It certainly seemed to be the topic on everyone’s lips at the recent Lords of Time convention. With the Master having been regenerated into a woman in the Series 8 finale, and Steven Moffat having been quoted as saying he’d like Peter Capaldi’s successor to be female, it’s certainly something which is seeming increasingly likely as time goes on. And yet, as far as I could tell, most people at the convention seemed to be against the idea. This surprised and saddened me. Surprised, because I’d always just assumed that the Doctor could regenerate into a woman anyway, and simply hadn’t done so yet. Saddened, because it often seemed to be women against the idea.

Much as many are unwilling to admit it, Doctor Who sure as hell needs more female voices. It is a sad fact that only a handful of women have ever written or directed for the program. The recently-announced episode for Series 9 to be penned by Catherine Tregenna will be only the fifth Doctor Who story ever to have been written solely by a women – Tregenna follows in the footsteps of just three other women, Barbara Clegg, Rona Munro, and Helen Raynor. Another five stories were written by women as part of a writing partnership – four stories in the late ‘80s by Pip and Jane Baker, and a single one from Paul Erickson and Lesley Scott in the ‘60s. Even then, it’s disputed that Ms Scott ever actually wrote a word on the story she is credited on – The Ark. And that’s avoiding the issue of the pseudonymous ‘Paula Moore’, who wrote Attack of the Cybermen, and who was probably actually script editor Eric Saward.

Directors fare little better. Since 1963 there have been only ten female directors – Fiona Cumming, Paddy Russell, Julia Smith, Sheree Folkson, Sarah Hellings, Hettie MacDonald, Mary Ridge, Catherine Morshead, Rachel Talalay, and Alice Troughton, and only one story, Enlightenment, which just happens to be one of the greatest ever, from both a script and a production point of view, that has been both written and directed by women. Five of them have worked on the program in the last six years, which suggests that things are looking up, but the question remains: why such a small list at all? Are there simply not as many women interested in working on Doctor Who as there are men? Are the producers past and present sexist? Verity Lambert hired no women writers or directors, but I doubt anyone would accuse her of sexism. This is the woman who did most of the heavy lifting to get Doctor Who off the ground, and who in the process created two vibrant female characters in the form of Barbara Wright and Vicki Pallister.

Yet later producers, most of whom were male, did drop the ball a fair bit. It’s hard to argue otherwise, when so many actresses – among them, Louise Jameson, Janet Fielding and Nicola Bryant – recount that they were told they were there “for the dads”, which in itself raises the question of why a program that was ostensibly for children felt the need to include sexualised content for adult men. Leela may have been a strong, positive female character, but as Louise Jameson herself has pointed out, the character’s costume left little to the imagination. To give another example, Peri’s reputation as a character seems to be mostly based around her breasts, with Planet of Fire’s lingering shots of a bikini-clad Nicola Bryant.

What’s interesting about that example, though, is that it’s directed by a female director (Fiona Cumming) who was working for a gay male producer (John Nathan-Turner). This shows that sexism in Doctor Who is less the result of the producers being horrible people who deliberately set out to mock and sexualise women, and more the result of a societal expectation that women are there to be sexually attractive objects. And for every negative example of sexism in the program, there are positive female role models scattered throughout the program’s history. Barbara Wright, Liz Shaw, Sarah Jane Smith, Donna Noble, Clara Oswald – I don’t think any of these companions qualify as pretty, vacuous, monster-bait. Despite the cliche, there are only three occasions that I can recall where a companion tripped and sprained their ankle. And one of those was Adric!

So, Doctor Who has had its good moment and its not-so-good moments when it comes to its depiction of women. And frankly, its record of hiring female writers and directors is atrocious. So right now would definitely be the perfect time to try and increase the number of female voices in the program. And surely hiring a female lead actor would be a great step in that direction. Perhaps having a female lead character would help to attract more female directors and writers to the program! We know the Doctor can become a woman. It’s been implied since the Sarah Jane Adventures story The Death of the Doctor, in which Clyde asks the Doctor if he can be black, to which the Doctor replies, “I can be anything I want.” Note that he doesn’t add “except a woman”. There’s been further hints dropped since then – the most significant coming in The Doctor’s Wife, in which we’re told that the Doctor’s old friend, the Corsair, has had both male and female regenerations. Then, of course, there’s the Master’s recent regeneration into a woman, which seems to have split opinion.

So, to my mind, it’s not a question of whether the Doctor can become a woman, but whether he should. And I’m yet to hear a convincing argument for why he shouldn’t.

Many people seem to take the attitude of “it hasn’t been done before so it shouldn’t be done at all.” Leaving aside the fact that I hold the opposite opinion, imagine if this view had been adhered to by earlier production teams. The casting of Peter Davison was controversial at the time, as it was thought he was too young to play the role. But is anyone going to deny how great Davison, not to mention the other young Doctors (McGann, Tennant, Smith) were in the role? Not all great actors are old, white men, and if Doctor Who’s producers don’t take risks in their casting from time to time, Doctor Who can never change and improve itself.

Another flawed counter-argument to the question of a female Doctor is that having the Doctor become a woman “doesn’t make sense.” Considering we’re discussing a fictional television program about a time/space machine that’s bigger on the inside than the outside, piloted by an alien being that can change his entire physical appearance, I feel as though any questions of ‘sense’ went out the window long ago. I imagine there were viewers in 1966 who thought the changeover from Hartnell to Troughton didn’t make sense either, especially as Troughton didn’t put on a white wig and do a Hartnell impersonation. But 50 years later, we can look back on that event and see it for what it was – a brave move on the part of a desperate production team, which ensured their program’s long-term success to the present day. Hiring a female actor as the Doctor could definitely fall into the same bracket as that early ‘nonsensical’ decision.

By far the most distressing comments I heard, though – made more so because they were being made by women – were things like ‘women need men to rescue them’, or ‘women can’t be heroes’. If anyone genuinely believes that then I urge them to pick up any newspaper, or simply look around them, because strong, heroic women, who serve as positive role models for all of us, are everywhere. As an example, look at Malala Yousafzai, the young Pakistani activist who was shot in the head and survived, for daring to stand up to the Taliban and demand that girls in her country be allowed an education. In fact, given that historically women have often been oppressed (and in many parts of the world still are), and that the Doctor always fights for the rights of the oppressed, it makes a kind of karmic sense that the Doctor should one day be a woman. It just feels right.

A female Doctor could be the most wonderful thing ever. I wouldn’t want a token female Doctor, chosen simply to be there and be female. Rather, I want to see the casting for the Doctor opened up to anyone and everyone, regardless of gender, age, or race. If a man is cast, then I’m sure he’ll do a great job, just as the past actors to play the role have done. But if a woman is cast, then equally great. I’d presume she was the best person for the job, and I’d hope that she would simply be the first of many, many more female Doctors. Whether she be an elderly Margaret Rutherford type, or a young, sexy Emma Stone type, there’s no reason in the world to suspect that a female Doctor couldn’t be as wonderful, as brave, as funny, and as heroic as any of her male predecessors.

The full version of the article can be read in DE#226, which is available for purchase from the DWCA Shop. Other content in the issue includes interviews with Lords of Time 3 guests Katy Manning, Matthew Waterhouse, Terrance Dicks and Geoffrey Beevers, plus a special edition of A Little Perspective featuring discussion between three female fans.