Enter the Virtual Whoniverse Down Under

For decades fans have dreamt of stepping into the Whoniverse and experiencing all of its wonders and terrors first hand. Now finally that dream can come true, through the wonders of Virtual Reality in the fully immersive environment of Doctor Who: The Edge of Time. This VR game allows players the opportunity to pilot a Dalek casing from the inside, wield the sonic screwdriver and face off against the Weeping Angels. Full of action, puzzles and cinematic effects, the VR game also features Jodie Whittaker as the Doctor and Nicholas Briggs as the voice of the Daleks. While the feature length game will be widely available online for those with VR headsets from 12 November onwards, a special 20 minute version will also be hosted by arcades across the world. Best of all, for once we aren’t left out in the cold here in the land Down Under, as six arcade locations across the continent plan to host the game. From Western Australia to Queensland, New South Wales to Tasmania, the door to the Whoniverse will open for the 56th anniversary on 23 November 2019 (Doctor Who Day). It will run from that day onwards, with no end date currently announced. Although bookings aren’t essential, to avoid disappointment at times of high demand it is recommended to call the arcade prior to visiting. Don’t miss out! 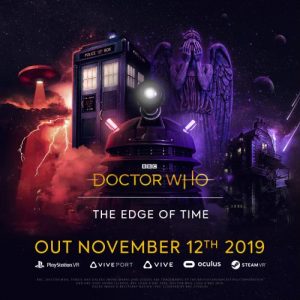 The Australian locations hosting Doctor Who: The Edge of Time are: